A Fascinating History of SEO 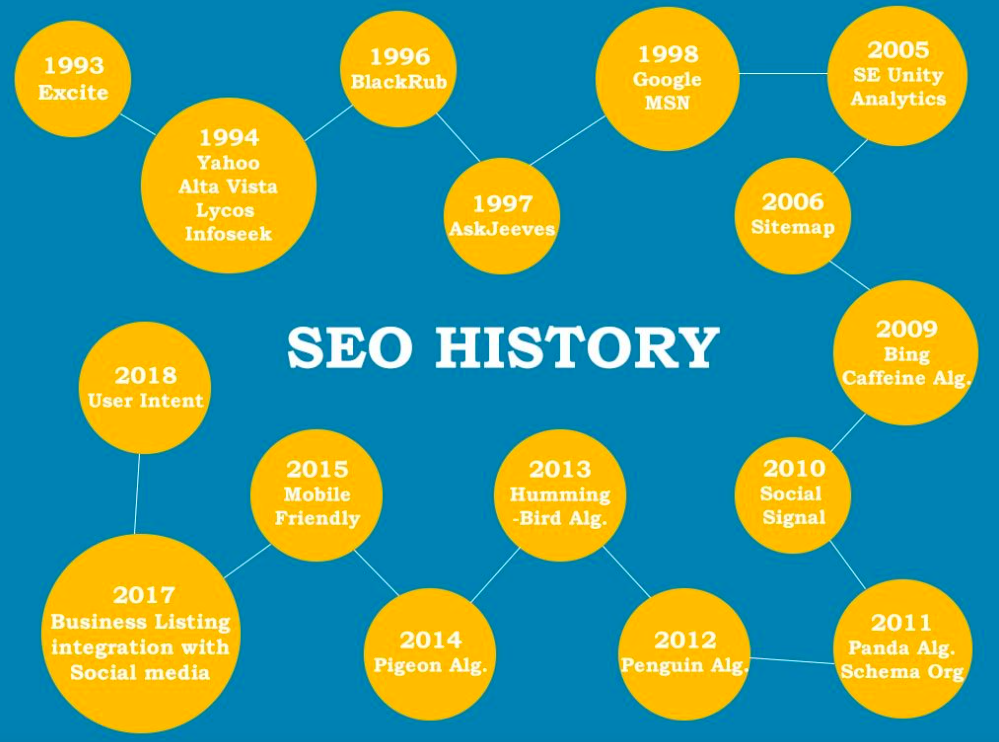 A Fascinating History of SEO

So, how do you map the history of something that is so every day that we do not even realise we are using it. Be it the meaning of a word, looking for a new restaurant or any other big or small thing in our click- it is all just a simple click away. How did we reach here? It was not always there. It was the late 20th century and the early 2000s where the internet really ‘broke’. That is to say, everything and everyone wanted to be online, it was the new ‘it’. That was all that there was to the world of business and technology. Everything had to absolutely be online. Though that trend or train of thought is still there. If you exist in any shape or form, you will be online.

However, the history of SEO is slightly more easy to map because of how closely linked it is to Google. There is no denying that Google holds the market for digital marketing in its palm. No website wants to be in the bad books of Google because they are the largest generators for organic traffic on websites across today. Therefore, to understand the history of SEO, you also need to understand the history of Google and it evolved. This is because Google was one of a kind venture in its time. Its primary function was to give people answers. Therefore, it gained popularity and over time. You have an exclusive and detailed field just to exist on these search engines under the name of Search Engine Optimization.

When Does It All Begin?

The history of SEO officially begins in 1997, with the launch of the first web search engine. This was also the time when people were just figuring out what to do with this newly built phenomena, so naturally many changes came.

The thought to even have a directory for the internet came in 1945, with Dr Vannevar Bush. However, that only remained in its ideation stage and did not really fall through. In the 1990s, the concepts of globalisation also meant opening the gates of the virtual world. From categorising the web into the form of a ‘directory’, the digital world moved to search engines giving results that would only match the exact keywords written and nothing else. Therefore, keywords were taken quite literally and it was an elaborate or intricate task then. This was why one could get away with simply writing a keyword again and again, to ‘rank’ higher. Thus, keyword stuffing was still considered okay till more nuances were introduced to SEO.

Google Comes into the Picture:

1998, you have Sergey Brin and Lawrence Page introduce Google to the world. While their ‘idea’ was no novel, it definitely helped get a clearer picture as to what people are looking for. This helped advance the field of digital marketing and SEO, in particular, because now people were getting more options for a few keywords that they had initially searched for.

This was when Google kind of took over the game, so to say. This was because they were focused on ranking websites according to their quality as well and not just their keyword density. This was when they started addressing what they consider to be “White Hat SEO”, even though it may not have been spelt out under this category. Essentially, they laid out what they will rank well on their website and what will not. However, not everyone took these ‘guidelines’ seriously because was just starting out at that point and keyword stuffing had been the norm, where searches were divided as a directory- the quality of the content was not focused on a lot.

It was only in 2003 when Google actually removed the ranking of a lot of websites that did not adhere to their guidelines of proper SEO that websites started taking those changes and strategies seriously. An amalgamation of quality and keywords began to take place. This further enhanced the area of off-page SEO because then even the URLs for each page started to become important.

With many changes that take place every few years in Google and then, SEO consequently, it is important to understand that this field will always be a work in progress as and when the wants and needs of people change, which is also constant.

Over the last five years or so, it has been made evident that Google wants to incorporate as many people into their network as possible. This includes people who are just starting out in business or are simply exploring the online world. They have made ‘tools’ for them to use to grow and compete against more and more competitors. They have moved towards localising SEO, giving more preference to websites that are optimised for mobile operations as well. Therefore, these minute classifications and preferences also make a big difference in the kind of material we consume today.

Thus, to say that there is a history of SEO is a bit of a misnomer because it is a continuous process that is forever being enhanced.

But Why is This History Important?

It is important for you to know its history as it will also give you an idea about the kind of changes that have taken place, that have rendered some of these SEO strategies as obsolete. It is also important for you to know why. Many people go into their optimization process without fully understanding that it is an on-going process. It will not be completed overnight and even if you have a ‘good’ ranking today, you will have to maintain it through different means.

This is also why the field now has SEO experts to help you solely with your problems of optimization and is an ever-growing field. You need a specialist to solely understand the process of optimization as it is extremely intricate now and you will need help manoeuvring through them.